The switched mode power supply or SMPS as it is sometimes known appears regularly on a wide variety of audio equipment. Anything requiring DC voltage to power it will almost exclusively be powered by the humble SMPS or power brick.  Its small, cheap and efficient, no wonder manufacturers love them!

What the makers don’t tell you are the inherent dis-advantages if using these power supplies, very low cost SMP’s may couple electrical switching noise back onto the mains power line, causing interference with A/V equipment connected to the same phase. Non power-factor-corrected SMPS’s also cause harmonic distortion. So as well as powering your equipment they also inject interference into your entire hifi system. A comprehensive article on Wikipedia helps understand why these little boxes are so bad!

At MCRU we always advise our customers to ditch the switch wherever possible and replace the supplied power brick with a fully regulated linear design which has numerous advantages over traditional SMP’s in particular what all audiophiles crave for ……………Improved Sound Quality.

The proliferation of hifi  equipment now powered by SMP’s is over whelming, DAC’s, Turntables, Headphone amplifiers, Phono amplifiers, Internet routers the list goes on and on. Some manufactures state that their products are so well designed that a linear power supply will make no difference in the sound, we beg to differ. With 1000+ of our linear power supplies in use globally  and virtually none returned the proof of the pudding is in the hearing!

Even the humble internet router has been known to benefit from a power supply up-grade, proven by customer feed backs. 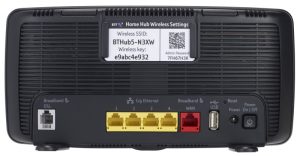 Most routers are powered by 12V DC and the delicate network in your home is prone to interference from the dreaded wall warts that power them. The BT Homehub, Plusnet Hub ONE and many more seem to benefit from a better power supply if you are using your router to stream music through. It’s  been suggested simply replacing ALL your switched mode power supplies will enhance the listening experience by removing the interference (RFI/EMI)  in your household mains system. Music stored on a NAS drive for instance will have a beefy power brick akin to a laptop power supply powering it and again not good for sound quality.

DITCH THE SWITCH, this phrase was first uttered as far as we know by a gentleman called Patrick Cleasby who at the time was working for the BBC  and maybe still is. The time was April 2012 and Mr Cleasby was commissioned to review our linear power supply for the Squeezebox Touch music streamer to appear in Hi-Fi Choice magazine. That was the first as far as we know professional review for any linear power supply for use in hifi.  The full review is still available to view here.

The power supply was awarded 5 stars and a recommended badge, sadly the “Touch” as it was known in audiophile circles was dis-continued years later but still remains one of the very best music streamers ever made, used examples changing hands for exalted prices on ebay still to this day. The review started the aftermarket power supply revolution and audiophiles quickly began to realize that ditching the switch was a no brainer for the vast majority of hifi equipment powered this way.

Fast forward 6 years and we see an explosion of equipment needing these small bricks. Indeed £1000 DAC’s, £3000 turntables, all powered by the dreaded SMPS. Many manufacturers will argue that the power supply is adequate for its given purpose and who are we to argue, yes it provides the required voltage to power the chosen item but that isn’t all it does,  go back to the first paragraph of this article or re-read this to realize just what’s happening to your beloved music system that you probably thought sounded stupendous!

Finally we have a few words from our chief linear power supply designer and will leave you with those few words to consider next time you power your DAC or Turntable or Phono stage up DITCH THE SWITCH.

When thinking of regulation, it’s worth remembering the Roman god Janus who was the god of gateways, and was a two faced god looking in both directions. Likewise a good voltage regulator is required to look in both directions at once. From one direction you have the mains supply, with the ever increasing noise, distortion and random variation that exists on our household mains supply. In the other direction you have the device you are supplying power to. The load will be asking constantly varying current, and the job of the regulator will be to ignore the varying load and to supply a rock steady voltage that ignores the changing load.

To ask a single regulator to perform both tasks means that it can not do either as well as it could. We don’t ask our regulators to be two faced, we split the two functions into two separate regulators and put them both where they can do the best job.

The first regulator is close to the mains supply, its job is to take the incoming mains and convert it into a low(ish) noise DC supply, and to isolate the mess that is our household power lines from what follows. In most power supplies on the market, the output of the first stage would be directly connected to the load device, and that would certainly be an improvement over the supplies that most manufactures provide. But we can do better by adding the other face of Janus to the system.

The second regulator is supplied with a clean low noise supply, and its job is to handle the changing demands of the load. To do that, it needs to be as close to the load as possible. So we remove the second regulator from the main box, and place it close to the load, both electrically and physically, that removes it from the noise and interference of the mains supply, and allows it to spend its time looking towards the load. Typical commercial voltage regulator chips are general purpose devices, but are not quiet enough for the task on hand, so the second regulator uses a bespoke regulator based on a low noise multi stage filtered voltage reference, a low noise error amplifier and a high current low resistance mosfet. To allow it to handle the changing load it also needs to supply current on demand, so all the remaining space in the second regulator is filled with low impedance capacitors to act as a local energy source.

Using the two stages of regulator, we achieve a noise floor equal or better than most battery supplies, and a effective source resistance of the order of 0.02 ohm (and the short cable run to the load avoids increasing this valve by adding copper where its not needed, and the use of a discrete regulator design allows that tiny value to be maintained way above frequency any audio device operates at.